The story of Eighteen Thousand Islands begins way back in the summer of 2002/2003. Merv and I, cousins who grew up in Melbourne with half Indonesian heritage on our mothers' side, decided to make a bit of extra cash by selling satays at the Queen Victoria Night Market here in Melbourne. We had grown up with big family barbeques where our grandmother's peanut sauce was smothered in abundance on what seemed like an an endless supply of chicken and lamb skewers.

We were inspired to replicate these feasts at the bustling night market where we were lucky enough to secure a stall every Wednesday night for that summer. We built a charcoal grill out of a 40 gallon drum and 'Warung Satay' was born. A warung is traditionally a small, family-owned business, usually a restaurant or cafe.

To say it was busy would be an understatement. Every week we had queues of people waiting for a taste of our peanut sauce - our grandmother's recipe - and in two hours we would sell over 2000 skewers and 60 litres of sauce. It was so successful that by the end of the summer we decided we wanted to open a permanent store.

It took another eight or nine months to find a location that was suitable; a tiny, empty corner shop in what was then a relatively quiet part of the Melbourne central business district. Although it wasn't on a bustling street with lots of foot traffic, we were positioned at the base of two 21 story office towers and across the road from a 50 story skyscraper. We knew if we did a good job, word would get out and we'd have no shortage of customers.

Merv and I decided to call our store a name that would have no ambiguity and customers would understand exactly what they were getting - 'Sataybar'. We spent 3 months with our bare hands on a very limited budget taking the small shell and converting it into what became essentially an open kitchen surrounded by stools. To fund Sataybar (we were still in our mid-twenties) we had to take out personal loans. What's more, to get the loans we pretended we were having weddings. Banks don't seem to mind lending unsecured for a wedding and I remember us getting quotes for rings, receptions, suits and wedding dresses!

Finally we opened Sataybar on April 4th, 2004. I remember the first day well. We took a paltry $450 and most of that was thanks to our friends. Word did start getting out though - a tiny place on Flinders lane doing nothing but satay. Back then, doing just one food was a bit unheard of. We would get plenty of raised eyebrows from people asking for noodles or fried rice and being told we didn't do it.

It wasn't long though before our single-offering store started to really get noticed. In October of that year Matt Preston, now of Masterchef fame, reviewed us in his weekly column for The Age Newspaper. In it he wrote,

And with that, we were off. Following that article we were featured in newspapers, magazines and on TV. The Melbourne CBD food scene started to explode and we being celebrated in most publications that featured Melbourne food.

By the end of 2005 Sataybar was going so well we opened a second location, this time right in the heart of the Melbourne CBD on Manchester Lane. The Age Cheap Eats, the city's food bible, had featured us each year we'd been open, writing,

We sold Manchester lane in 2007, keeping the original Flinders Lane Sataybar. Both Merv and I returned to our original career paths while Sataybar continued under management. It continued to thrive until we decided to sell in 2012 after over 8.5 years of operating. Those early days of Sataybar hold so many great memories and it was so special to be able to build something of a tribute to our late grandmother and her wonderful cooking.

In 2015 Merv and I have rediscovered that itch we had in the early days. We had always talked about getting our peanut sauce into jars and onto shelves but we were both so busy with other projects and starting families. We also felt we had so much more Indonesian food, and in particular our grandmother's cooking, to explore. This time, we chose a name that was almost the exact opposite to our one-trick-pony Sataybar. Eighteen Thousand Islands is a rough estimate of the number of islands in Indonesia, and for us that represents endless opportunities with so much to discover and share. 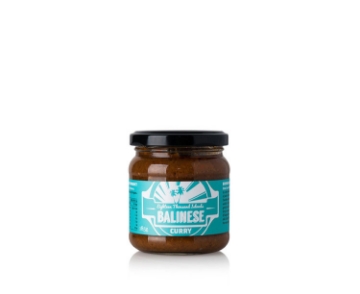 By Eighteen Thousand Islands
The flavours of a traditional Balinese spice mix are captured in our fragrant Balinese curry paste. One jar serves 8 and goes beautifully with chicken (or tofu and veggies for vegetarians). It’s like no other paste out there! This paste is gluten free, vegan and locally made.
$7.50
$10.00 25% Off
Collection Date Not Available

By Eighteen Thousand Islands
Our family’s take on the classic Indonesian dish, our mild, family-friendly, rendang curry packs a smooth, rich flavour that tastes equally good cooked with beef or chicken. Just add coconut milk and follow the simple directions on the label! This mix is gluten free, vegan and locally made.
$7.50
$10.00 25% Off
Collection Date Not Available